In conjunction with National Volunteer Week, Kemptville District Hospital (KDH) celebrated its Auxiliary members and volunteers on April 27, 2017 with a Volunteer Appreciation Luncheon held in nearby Burritts Rapids, Ontario.

Dozens of volunteers packed Lock 17 Bistro overlooking the historic Rideau Waterway, where the event began with a few words of thanks from the hospital’s CEO, Frank J. Vassallo.

“Whether it is greeting people with a smile and helping them find their way, serving up a bowl of soup and a kind word at the coffee shop, or holding the hand of one of our interim long-term care residents, you make a difference at KDH every day!” Vassallo told the assembled volunteers emphatically.

“The KDH Auxiliary has played a critical role in building this hospital and making it what it is today,” he added. “Please know that your efforts are appreciated by staff, physicians, the Board of Directors, our patients, families and visitors.” 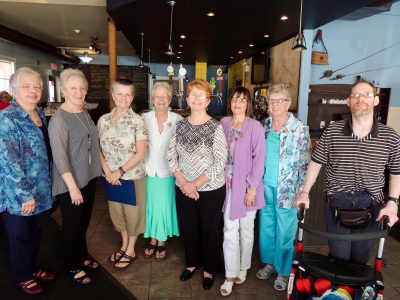 Next on the afternoon’s agenda was Bev Cecchini, a longtime volunteer who is retiring as the General Manager of the hospital’s coffee bar due to an upcoming move. She described how she stepped in to help a decade ago and, before she knew it, found that she had “inherited” the job of looking after the coffee bar’s finances!

“I was in my own little heaven in that role,” she explained. “The customers, especially the staff customers, are very nice, and working in this hospital with so many smiling faces can only make you feel good!”

Cecchini also described her work on the Auxiliary’s Executive, where positions can be hard to fill. “I highly recommend both volunteering in this hospital and becoming a member of the Auxiliary,” she concluded. “It’s not just a rewarding experience, but you make new and lasting friendships.”

Next, Auxiliary President Connie Parsons presented a few facts and figures to help volunteers recognize their achievements:  the organization’s full roster of volunteers at the end of the year totalled 157; in 2016, volunteers gave 11,627 hours of their precious time to KDH; and, a few weeks previously, the Auxiliary had made an annual donation of $65,000 to the hospital for the third year in a row.

Parsons also made special mention of the passing of longtime KDH volunteer Katy Pominville in December 2016; Katy had been a supporting member of the Auxiliary right up to the age of 109. “She was an inspiration!” Parsons declared.

Parsons then recognized a number of dedicated volunteers with awards. First, she acknowledged Bev Carson and Jane Wolfe, who had each received Provincial Life Memberships from the Hospital Auxiliaries’ Association of Ontario at its spring conference in Perth, Ontario the previous week.

She then presented Certificates of Appreciation for five years of service to Louise Shaw and Lois Watts-Sculthorpe.  Next, V (for Volunteer) Pins were awarded to the following volunteers in recognition of 10 years of service: Patrick Brauneisen (in absentia), Sue Cotter, Allison Penny, Douglas Southcott, and Donna Thibert.

Following these awards, Past Presidents Lillian Leonard and Jane Wolfe presented flowers to both Bev Cecchini and Elaine Martin in honour of their upcoming retirements from the Auxiliary.

The event concluded with a plug for the Auxiliary’s upcoming annual giant garage sale, Hey Day, scheduled for June 9 and 10, 2017, at the North Grenville Curling Club in Kemptville.