SEPTEMBER 30, 2012 – The surgeon was in the middle of a tonsillectomy when the power went off; after a few long moments, a generator kicked in and there was light again, allowing the surgery to continue. This is a commonplace occurrence in hospitals in Cameroon, along with water interruptions and uncontrolled humidity. These were a few of the eye-opening realities Sally MacInnis, the infection control nurse at Kemptville District Hospital, experienced while touring hospitals in the West African country. 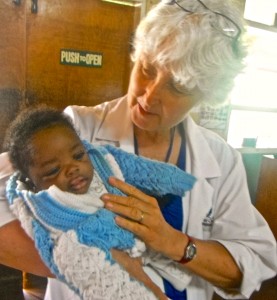 MacInnis was on a fact-finding mission to Cameroon with fellow infection control nurse Dana Anderson from Belleville, Ontario. They travelled as volunteers, representing the Eastern Ontario Chapter of the Community and Hospital Infection Control Association (CHICA), to observe infection control practices at Cameroon Baptist Convention Health Board (CBCHB) facilities.

MacInnis is the current president of the Eastern Ontario Chapter of CHICA, a national association that promotes best practice in infection prevention and control. MacInnis’ chapter embarked on a twinning relationship with the CBCHB in 2010 with the aim of assisting with resources and mentoring for the Cameroonian medical facilities.

Infection prevention and control is about attempting to prevent the spread of infections between patients, staff and visitors as a result of overcrowding, dirty equipment and/or dirty hands.

MacInnis and Anderson timed their two-week trip to coincide with the tenth anniversary of infection control practices for the CBCHB in May, 2012.

Cameroon is known as “Africa in Miniature” because of its geographical and cultural diversity. Its terrain includes beaches, deserts, mountains and rainforests, and the country is home to over 200 different linguistic groups; French and English are the official languages. Compared to other African countries, Cameroon enjoys relatively high political and social stability. This has permitted the development of agriculture, roads, railways, and petroleum and timber industries. Nevertheless, large numbers of Cameroonians live in poverty as subsistence farmers.

MacInnis explains that the three primary health concerns in Cameroon are HIV/AIDS, tuberculosis (TB) and malaria. Cameroon has among the highest mortality rates for children in the world, as well as a very high maternal mortality rate. According to UNICEF, 30% of the population lack access to safe drinking water, and 67% lack adequate sanitation, resulting in regular outbreaks of cholera.

MacInnis and Anderson flew to Douala, one of three large cities in Cameroon. They were met by a CBCHB staff member and a driver, and spent the next two weeks touring by car, with stops in Bamenda, Banso, Mbingo and Mutengene. They visited a variety of hospitals and health centres operated by the CBCHB in the towns, as well as primary healthcare centres located in remote villages.

MacInnis reports that the power often goes off at night in most Cameroon hospitals, and it gets dark at about 6:30 pm since the country is relatively close to the equator. Most rural medical clinics in Cameroon have no electricity or running water, and limited funds for supplies. Travel and supply distribution are difficult due to bad roads, which get even worse during the rainy season.

Hospitals in Cameroon are built with big porches, explains MacInnis, where family members sleep on bedrolls they’ve brought along. Since there are no meals provided for patients, they also bring food. MacInnis notes that there is often cultural resistance to going to the hospital – it’s seen as the place where people die. There are also financial barriers, as patients in Cameroon pay for every item used in their care, from their hospital bed to lab tests. Many patients have very low income, and many have already sought assistance from a local healer before coming to the hospital for medical care.

Accommodations for MacInnis and Anderson were mostly gated ‘rest houses’ operated by the Cameroon Baptist Convention, and meals consisted primarily of rice, chicken and beans. They were careful to drink only bottled water. As they toured Cameroon, the pair were always accompanied by a CBCHB staff member.

There was a great need to try producing alcohol-based hand-rub (ABHR) in Cameroon. The World Health Organization (WHO) has a recipe for ABHR, and with that in mind the MacInnis’ chapter of CHICA had made arrangements with a North American company to donate a supply of containers to the CBCHB to bottle and distribute this product. A central pharmacy manufactures the ABHR manually and has introduced it to the four main hospitals in the CBCHB.

MacInnis and Anderson wanted to observe the process of making the hand-rub. They were able to watch the technicians mix the product by hand, and noted that the staff wore gloves, hats and masks to ensure sanitary conditions were maintained. During their visits in Cameroon, MacInnis and Anderson made several presentations to medical staff on using alcohol-based hand-rub according to WHO standards.

Having observed the local infection control practices, the two Canadian nurses concluded that Cameroonian healthcare providers are doing remarkably well, considering the limitations of providing healthcare in a resource-poor country.

In keeping with their Chapter’s goal for the twinning relationship of mentoring the CBCHB, the Canadian nurses were able to offer several suggestions for improving infection control practices in Cameroon. The production of ABHR is very labour intensive; mechanical assistance, such as a mixer, would be very helpful in order to increase production and provide ABHR to the other facilities within the CBCHB. Another suggestion is to have ABHR available in the operating rooms, where hand-washing can be an issue. A third suggestion relates to preventing the spread of TB: better separation of TB patients from other patients in the hospital – in the open wards, suspected TB patients may pass the disease on to several other patients before they are officially diagnosed and isolated.

In addition to mental pictures of the hospitals and health centres she visited and the people she met, MacInnis’ trip to Cameroon has left her with images of cows wandering down the roads and people selling bananas, mangos, peanuts and colourful handmade clothing at roadside markets. The trip was “an amazing experience,” says MacInnis. “It has given me an appreciation for all that we have here. We are so used to having all the services and supplies at our fingertips that we have forgotten how blessed we really are.”