This is not the case for 17-year-old high school student Dan Williams, who recently painted a 40-foot mural on a wall of the Interim Long-Term Care (ILTC) unit at Kemptville District Hospital (KDH). 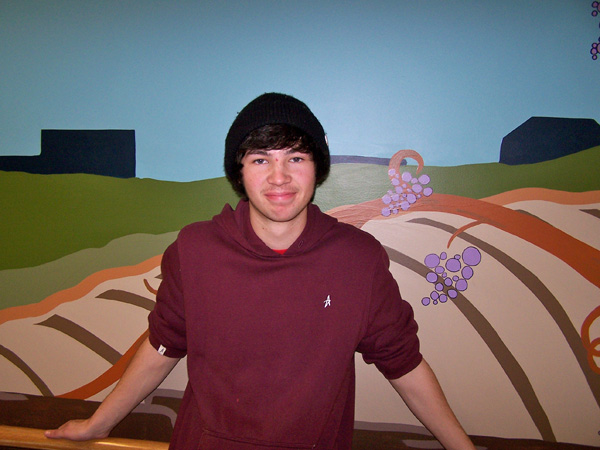 Comments from KDH Interim Long-Term Care residents and staff have been universally positive. “Everybody who walks by comments on the mural,” said Physiotherapy Assistant, Laurie Laporte-Piticco. “It’s transformed the hallway and has become a focal point of the unit.”

The eye-catching mural depicts a farmer’s field bordered by a rail fence, against which grow pumpkins and grape vines; in the background is a cityscape. The scene suggests Williams’ hometown, Kemptville, Ontario, with its rural ambience and big city proximity.

The mural’s creator, Dan Williams, is a student at nearby North Grenville District High School (NGDHS). His mural project at KDH earned him credit in the school’s co-op program. Williams consulted on the design of the mural with NGDHS art teacher, Barb Tobin. He then sketched his design on paper and transferred it freehand to the hospital wall. Then the huge job of painting the mural began. The project took Williams about four weeks to complete, working 9am to 2pm, Monday to Friday.

The idea for the mural project came from Laporte-Piticco; she is the activity coordinator for the ILTC unit and helps patients with restorative care during their time on the unit. She imagined a mural that would not only beautify the ILTC unit, but also disguise a door that attracted the attention of patients but was accessible only to staff. After Laporte-Piticco had a chance meeting with Tobin, everything fell into place.

The inspiration for Williams’ mural painting came when he was following his other passion: competing in BMX off-road bicycle racing. Through that activity he had the opportunity to help with the creation of murals at skate parks in both Kemptville’s Riverside Park and the South Gower, Ontario Children’s Park.

The mural at KDH is Williams’ first “really big” mural. His early murals were painted on the walls of his bedroom – with the full support of his mom, who is artistic herself. Moving beyond the familiar walls of home, Williams painted a mural on the walls of the Moose Mart store on Prescott Street in Kemptville last year, before rising to the challenge of creating the KDH mural.

Williams discovered his passion for art about three years ago. “I just woke up one morning and realized this is what I want to do,” he said. Before that he had “ignored” art. In 2011 he entered and won a contest to design a logo for the 75th anniversary celebrations of NGDHS. “It was pretty cool to see my logo printed on t-shirts,” he said. “My mom was really proud of me!” In that moment, Williams realized that he could make a living doing what he loves.