KDH Auxiliary celebrates 60 years of volunteering with an Anniversary Tea

The Kemptville District Hospital (KDH) Auxiliary will celebrate its Diamond Jubilee with a 60th Anniversary Tea at KDH on Thursday, September 19, 2019 from 2:00 to 4:00 pm.

“All are welcome!” declared KDH Auxiliary Vice President Linda Carnegie. “It will be a great opportunity to learn more about our history and visit with past and present Auxiliary members and special guests, including past Auxiliary presidents.” 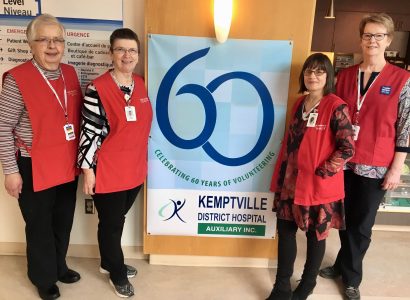 The KDH Auxiliary was formed in 1959, a year before KDH opened its doors in June of 1960. The Auxiliary’s mission was then ─ and still is today ─ to provide volunteer service to KDH patients, promote good public relations, and raise funds to assist the hospital in providing quality community healthcare.

The Auxiliary has a long history of success in fulfilling this mission. Notably, volunteers at KDH set a new record in 2018, donating a grand total of 14,117 hours. This feat was achieved by 81 people volunteering onsite at KDH, 38 members of the Acton’s Corners Unit, and an additional 140 individuals who volunteered at Hey Day, the Auxiliary’s major annual fundraiser. To date, the Auxiliary has raised an astounding $1.43 million dollars for KDH. The money is used to purchase essential medical equipment, providing KDH’s care teams with the tools they need to do their jobs to the best of their ability.

Frank J. Vassallo, KDH’s Chief Executive Officer, expressed his congratulations to the Auxiliary on reaching this milestone. “Throughout their 60-year history, the KDH Auxiliary has been a pillar of strength for KDH and our community,” he said.  “It’s hard to imagine what KDH would be like without the tireless efforts of the Auxiliary over the years,” he added.

The 60th Anniversary Tea will be held in KDH’s Courtyard Lounge. Welcoming remarks will be delivered at 3:00 pm, followed by a history of the Auxiliary. Parking will be free during the event.