After event organizer and staff coordinator of volunteers Emilee VanderHoek had welcomed the dozens of members of the KDH Auxiliary to the North Grenville Municipal Centre, Frank J. Vassallo, KDH’s Chief Executive Officer, stepped up to the microphone.

“Day after day, I am humbled by your compassion, dedication and energy,” he began. He thanked the volunteers for choosing KDH to be the recipient of the gift of their time; he also expressed the hospital’s gratitude for their fundraising efforts, which resulted in a recent annual donation in the amount of $70,000. “You work tirelessly to raise money for essential medical equipment that KDH otherwise would not be able to afford,” he stated. “Your efforts mean that our care teams have the tools they need to do their jobs to the best of their ability.”

“The Auxiliary has played a critical role in building this hospital and making it what it is today and it’s hard to imagine what KDH would be like without the Auxiliary and all of our volunteers,” Vassallo concluded.

Brenda Steacy, President of the KDH Auxiliary, then took to the podium, noting that volunteers at KDH had set a new record in 2018, donating a grand total of 14,117 hours!

This feat was achieved by 81 people volunteering onsite at the hospital, 38 members of the Acton’s Corners Unit, and an additional 140 individuals who volunteered at Hey Day, the KDH Auxiliary’s major annual fundraiser. 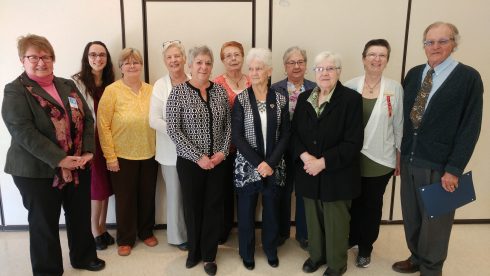 Steacy had the enjoyable task of presenting a number of volunteer awards. First, she handed out Certificates of Appreciation to Johanna Kuntz, for her dedication to ensuring Comfort Dolls are available to children visiting KDH, to Linda Carnegie (in absentia), for coordinating last fall’s Bridal High Tea, and to Barb Keleman (in absentia) and Joyce Seguin, for Longstanding Service to the Acton’s Corners Unit.

Next, Steacy presented “V” (for Volunteer) pins as follows: to Connie Parsons and Belle Severn, for achieving 1,000 hours of active volunteer service; to Jolene Stover, for four years of service on the Executive Committee; and to the following members who did not receive a V pin in 2016 — Betty Beach (in absentia), Ina Dyks, Ruth Earl, Mae Fairfield, Marguerite Gooch, and herself!

Outstanding Service Awards were then bestowed on the following members: Connie Parsons, for her service as Past President; Jolene Stover, for four years of Coordinating Hey Day; and Joan and Frank Gallagher and Sylvia Johnston (in absentia), for 15 years of active volunteer service as of 2018.

Steacy next announced Retirement Certificates for Sylvia Johnston and Harry Tarr, for 16 and 14 years, respectively, of active volunteer service.

Following the presentations, the event’s attendees were treated to an exciting live musical performance by approximately 40 drama students from North Grenville District High School (NGDHS). With their teacher Meredith Island-Mott looking on, the students presented several scenes from their latest production, Disney’s Beauty and Beast, slated for May 16 and 18, 2019 at the high school.

The final speaker of the day was Lana LeClair, KDH’s Vice-President of Corporate Services and the hospital’s senior leader for the volunteer program. She expressed gratitude to everybody who had helped make this year’s Volunteer Appreciation Tea so memorable, including NGDHS’s talented students and AJ’s Catering. The event wrapped up with LeClair’s statement that “this opportunity to recognize the contributions of our volunteers is one of the most important events in the annual life of KDH.”

NOTE: The KDH Auxiliary is seeking volunteers for Hey Day, its annual giant indoor garage sale to be held June 7 and 8, 2019. Potential volunteers and donors may contact Jolene at 613-558-1761.