With some attendees decked out in hats and gloves, several dozen Kemptville District Hospital (KDH) volunteers gathered at Southgate Community Church on April 19, 2018 to be honoured at the hospital’s annual Volunteer Appreciation Tea.

Frank J. Vassallo, KDH’s Chief Executive Officer, welcomed the volunteers and thanked them on behalf of all KDH staff, physicians, and the Board of Directors for their outstanding service to the hospital.

“Often your face is the first they see when patients and families come through our doors,” he noted. “Your smiles, kind words and gestures create a wonderful impression, and their visit starts off in an exemplary way,” he added. 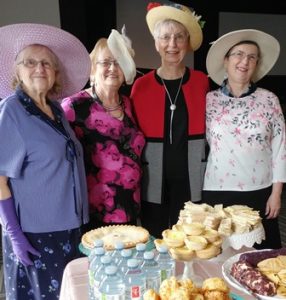 After plates had been filled with delicious refreshments including sandwiches, scones, tarts and other desserts, all beautifully presented on cloth-covered tables, the current Kemptville District Hospital Auxiliary (KDHA) President, Connie Parsons, rose to speak. She began by thanking all the volunteers for a great year serving as their president. “I’ve gotten to know most of you personally during the year,” she said, “and it’s been a joy!”

Parsons continued with a recap of the volunteers’ efforts on behalf of the hospital in 2017, noting that the Auxiliary’s total number of members, including the Acton’s Corners unit and Hey Day volunteers, was 220 dedicated individuals. Together they gave more than 12,000 hours of their time to KDH in 2017.

In addition to providing volunteers for every area of the hospital, the KDHA raises funds for essential medical equipment. A round of applause greeted Parsons’ announcement that the organization had recently written a cheque to the hospital for $65,000 – for the fourth year in a row. Further, the Auxiliary’s total contribution since its founding in 1959 is in excess of $1.3 Million!

Parsons asked for a moment of silence to recognize volunteers who had passed away during the previous year: Judy Armstrong, Alice Ballerscheff, Steve Desjardins, and Joan Selleck.

She then presented a number of awards to members who had achieved service milestones in 2017:

The tea was catered by Gypsy Rose Wedding and Event Services and organized by Pamela Lalonde, KDH’s Volunteer Coordinator. Playing guitar and singing, Hunter Lalonde provided musical entertainment that was appreciated by all in attendance.

The event concluded with Parsons sharing that the Auxiliary is in need of more volunteers; she encouraged everyone present to help spread the word. For more information about becoming a volunteer at KDH, please contact the Volunteer Coordinator at volunteer@kdh.on.ca