KDH is creating a permanent historical display to celebrate its first 60 years and is asking for the community’s help, seeking artifacts of all kinds – from nurses’ uniforms to antique stethoscopes, photos and even memories from the period.

The installation of the display in the spring of 2019 will coincide with the sixtieth anniversary of the KDH Auxiliary, which was founded in 1959 to raise money to help make a hospital for the Kemptville District a reality; in 2020, the hospital itself will celebrate 60 years since opening its doors in June, 1960. 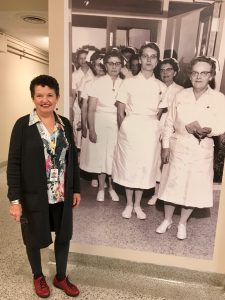 The main theme of the new historical display, to be located in the main lobby, will be that KDH is the hospital that the Kemptville community built. “This district needs a hospital!” was the rallying cry for the concerned citizens of the day, who raised money to build KDH at an amazing rate, once even collecting $282,000 (equivalent to $2.2 Million today) in a one-week canvassing blitz.

The display will also explore the differences between 1960s rural hospital care and the state of the art healthcare that KDH offers today, thanks to the ongoing generosity of the communities it serves.

The hospital is working very closely on the project with the KDH Auxiliary, which, for 60 years, has painstakingly archived newspaper clippings, photos, and other memorabilia related to KDH. The North Grenville Archives and others are also collaborating on the project.

To this day, the Auxiliary continues to raise funds for KDH; its annual gifts to the hospital are in the neighbourhood of $65,000, and its total contribution since its founding is in excess of $1.3 Million.

The historical display will also pay tribute to the KDH Foundation, which came into being in 1979 to fundraise for priority medical, diagnostic and surgical equipment vital for providing the best in patient care. To date, the Foundation has raised $12 Million in support of KDH. 2019 is a significant year for the KDH Foundation as well, as it will be celebrating its fortieth anniversary.

Lynne Clifford-Ward from KDH’s Communications Department expressed the hospital’s excitement about the new historical display: “We can’t wait to see what comes in from the community,” she said. “We are looking for medical artifacts, nursing and candy-striper uniforms, photographs, film, and other related materials, as well as personal memories and insights that tell the story of the hospital in the heart of a vibrant community, serving and caring for generations of local people.”

She noted that, for both the Auxiliary and the hospital itself, 60 years marks a “Diamond Anniversary”.  “Look for a diamond-themed celebration when we officially open the new historical display,” she enthused.

KDH Board of Directors seeking Chief of Staff