1907: Wilfred Laurier was Prime Minister of Canada. Early automobiles shared the road with horses and buggies. It was the year that Marconi initiated commercial transatlantic radio communications, and the passenger liner RMS Lusitania made its maiden voyage from Liverpool to New York City.

Pominville, who recently made her annual donation of dozens of hand-knitted items to the small Eastern Ontario hospital, is arguably the oldest living hospital volunteer in Canada. She turned 108 on December 27, 2016. 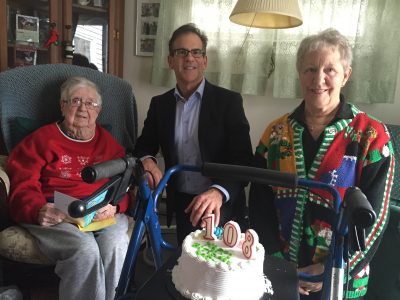 For more than 30 years, she has knitted socks, mittens and scarves all year long and donated a huge bag of them at Christmas time to be sold in the hospital Auxiliary’s gift shop.

On December 23, 2016, the hospital’s CEO, Frank Vassallo, and the President of the KDH Auxiliary, Jane Wolfe, paid a visit to Pominville to express their gratitude and wish her a happy birthday.

Vassallo commented that Pominville’s dedication to the hospital serves as an inspiration to volunteers everywhere.

“Katy is a shining example of what true commitment looks like, and how it is realized in the community,” he said.

In 2011, when Pominville was 103, the KDH Auxiliary honoured her as (in all likelihood) Ontario’s oldest hospital volunteer. They presented her with a special certificate of appreciation and a local life member pin in recognition of her longstanding contributions.

Four years later, Pominville is still knitting and taking each day as it comes.

She lives alone in her own home. She passes the time with knitting and watching the small birds at the feeder outside her front window. She sits in her rocking chair and rocks. She reads the newspaper.

She’s not much of a tv watcher; there’s nothing good on anymore, she complains – except when the Toronto Maple Leafs are playing.

Pominville has been a Leafs fan since her family used to gather around the radio on a Saturday evening to listen to their games. She grew up with the Leafs and has stuck with them.

The team even sent her a birthday card on her hundredth birthday.

She’s pleased the Leafs have a new coach this season, but figures it will take a couple of years before his influence will be felt. “Good or bad, I cheer for them anyway,” she laughs.

Pominville says her hearing is “perfect,” but she’s having a little trouble with her eyesight: “I can’t read the small print in the newspaper,” she says ruefully.

She moves around her one-level home with the help of a walker. “As long as I have something to hold onto, I can get around,” she explains.

Pominville prepares her own meals. Recently, when she had three younger family members over for supper, she cooked a pre-stuffed turkey – “a marvelous innovation”, she says.

Knitting, which has long been her favourite pastime, is getting a bit difficult, as her hands just don’t work the way they used to, she says. She has been knitting every day for decades. When she packages up the year’s knitting at Christmas time, she divides it in two: half for KDH, and half for the Salvation Army. This is instead of a money donation, she explains, and both groups “seem to appreciate it.”

She plans to keep knitting until she can’t anymore.

Pominville says her memory also isn’t what it used to be. She’s not sure exactly how old she was when she got married, or how many great-grandchildren she has – she reckons about 10, the same as the number of her grandchildren.

Pominville’s husband, Lorne, died in 1997. They had six children; sadly, only three are still alive. One son lives around the corner from Pominville in Kemptville, and another lives in nearby Oxford Mills; her daughter lives in Sarnia but calls her Mom most days.

Pominville rarely leaves the house – she doesn’t need to, she explains. Her son in Oxford Mills does all of her grocery shopping; her daughter-in-law in Kemptville gets her mail.

She went out for a large family Christmas gathering at a granddaughter’s house, and she took  the Christmas pudding, made from scratch.

Pominville’s family doctor comes to her house if she needs him. She takes three different medications: one is for high blood pressure; she’s not sure what the other two are for, but thinks they are probably vitamins.

She is remarkably free from aches and pains.

Pominville doesn’t know what the secret to her longevity is. “I’m just here; I guess I’m supposed to be here,” she says. However, she’s never consumed alcohol and doesn’t drink coffee or tea. (Cold water is her beverage of choice). She’s never smoked, or been a big meat eater, or cared much for milk or other dairy products. She eats a lot of fresh vegetables and fruit, she says.

And she’s worked hard all her life. Growing up on a farm in Thurso, Quebec, taught her about hard work. There were always chores to do. There was no tv, no phone, and no lights – only coal oil lamps. She was grown up and married before her family got electric lights on their farm, she recalls.

She’s never done any formal exercise. “We worked all day – that was our exercise!” she exclaims.

She was never sick very much; even when her kids came home from school with a cold or the flu, she didn’t very often catch it. She had “a sick spell” a couple of years ago, she says, but she “got over it.”

Pominville has been hospitalized twice for surgery – once to have her appendix removed when she was about 20; the other time to have her gallbladder out at KDH a couple of decades ago. “The rest of me is intact,” she says.

Having moved to Kemptville with her husband Lorne and young family some 75 years ago, Pominville is proud to have stayed home and raised her children herself. She also raised them to stick close to home, she says. She always knew where they were; in the summer they never left her yard.

Everything is different now, she reflects. She remembers the “good old days” when people weren’t afraid to go out at night and didn’t lock their doors. She disapproves of computers and other modern technology, and worries about kids today spending all day on their computers  – “they should be getting outside, working and playing,” she believes.

Pominville has never flown in an airplane or gone for a ride in a boat. “I stayed on land,” she says simply.

Another thing that has changed is that, “You don’t know when it’s Sunday anymore,” she says. When she was younger, Sunday was a rest day. On the farm, they fed and watered the animals, but that was all the work they did. Pominville maintains that tradition, not even taking up her knitting needles on a Sunday. “Six days is enough to work,” she states.

She agrees she’s seen “quite a bit” over her long life. She wonders what life will be like 100 years from now, if things change as much in the next century as they did in the last.

Pominville humbly describes her life as “just a plain old life.” “I don’t know how long it will last,” she adds, “but I know I’ve had a good long life. I’ve done my share.”