The month of June was chosen for this tribute as KDH’s doors officially opened on June 29, 1960. On that day, members of the KDH Auxiliary provided guided tours to more than 2,000 curious visitors. People from all over the region lined up to see what had been described in the Ottawa Citizen as “one of the best designed, most modern hospitals in Canada.”

The community was already very much invested in KDH, not only in terms of the financial donations that had made the construction possible, but also as a result of years of planning and advocacy by a determined group of local volunteers. “This district needs a hospital!” had been their rallying cry.

Over the decades, the hospital and the community have changed and grown side by side, through good times and bad.  When the Great Ice Storm of 1998 hit Eastern Ontario, KDH, with its diesel generators working at full tilt for weeks, provided food, shelter, and a respite from the cold and freezing temperatures. Now, as the community grapples with the ongoing realities of the COVID-19 pandemic, KDH remains a haven of safety and security.

For the North Grenville community, having a hospital close to home is as important now as it’s ever been.

KDH continues to evolve to meet the changing needs of the community. A major expansion in 2011, again financially supported by the community, this time through the KDH Foundation’s Lean On Me campaign, resulted in a new Emergency Room, state of the art Operating Rooms and Diagnostic Imaging suite. This was followed shortly after by the inception of KDH’s award-winning hip and knee replacement surgical program. Then in 2017, KDH opened its new clinic wing on the upper level of the hospital, where 4,000 square feet of under-utilized space was modernized to effectively double KDH’s array of outpatient services.

KDH’s further evolution now sees the hospital looking beyond its walls more and more. “I’m proud to say that KDH has become a leader in building and facilitating partnerships among health service organizations in the region with the aim of improving the coordination and integration of care,” said CEO Frank J. Vassallo.  “Current extramural efforts include working with multiple partners to help develop an Ontario Health Team, incorporating a much-needed initiative to increase access for children and youth to mental health and addictions services,” he added. 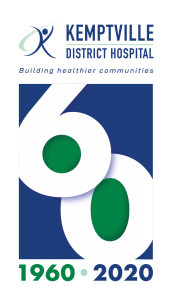 Long before the coronavirus arrived in North America, KDH had planned a series of events throughout 2020 to celebrate its first 60 years. The highlight of the year was to be a Strawberry Social Open House on the hospital grounds on June 27, 2020, the closest Saturday to the anniversary of Opening Day.

Although all of the special events have had to be postponed due to the pandemic, “We are not going to let the anniversary of our Opening Day go by uncelebrated!” Vassallo stated. The hospital has switched gears and will be holding a Virtual Open House on June 27, 2020 from 1:00 to 2:00 pm. The program for the Open House will include greetings, videos, and a short history of KDH. The entire community is invited to attend – a link to the online event will be shared widely closer to the date.