MAY 28, 2012 – Kemptville District Hospital (KDH) is the first hospital to join with the team of Hart Laundry Service and Booth Centennial Healthcare Linen Services, who have partnered to provide a complete linen service. 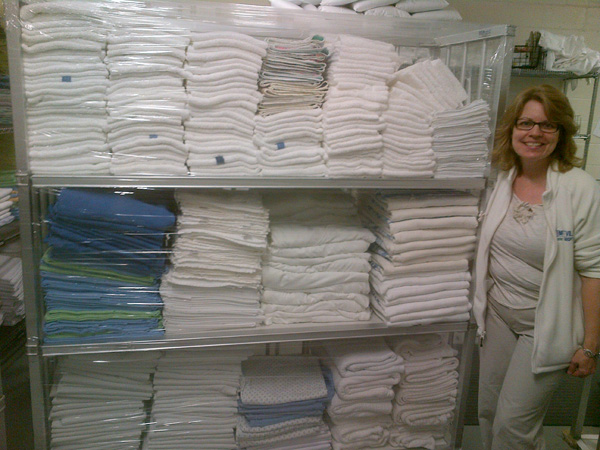 For KDH, this decision results in increased efficiency. Prior to the signing of this contract, the hospital received general linen in bulk quantities from another provider, and laundry/housekeeping staff had to count out various items of linen and compile them in carts for delivery to different areas of the hospital. Now, Hart Laundry prepares the carts with the desired quotas for the various areas and they are delivered ready for use.

The linens designated for the operating room (OR) are shipped to KDH in sterile locked carts so the integrity of sterile items cannot be compromised. Previously, after arrival at the hospital, OR linens had to be wrapped in bundles for the OR and then sterilized prior to use. This job was done by the Medical Device Reprocessing Department (MDRD) at KDH, who can now focus on sterilizing the operating room instruments as KDH increases its OR surgical volumes. Three or four OR’s are now in use at KDH on a daily basis.

Cathy Watson, Manager of Clinical Programs, expressed KDH’s satisfaction with this new initiative: “The biggest impact is the exceptional quality of the OR linen that we are receiving and that our MDRD staff no longer have to assemble bundles for the OR and sterilize it onsite.” She added, “We have already noticed the benefits of having Hart Laundry Services so close to home, and it is evident they are fully committed to ensuring their customers are happy. We believe we have made a great choice in being their first customer.”

The Rideau Regional Centre, which had a longstanding laundry operation, was closed by the Ontario Ministry of Community and Social Services in September 2009. In June 2011, J.A. Gallipeau Construction and Development purchased the former Rideau Regional Centre buildings and property. The first plan for the complex was to reopen the laundry operation; accordingly they hired Larry Hart, who brings 39 years of experience in the laundry business, including more than two decades as manager of the laundry services on the site.

Larry Hart started his laundry career at the Rideau Regional Centre in 1973, leaving in 1980 to gain experience elsewhere. This included laundry management positions at the Riverside Hospital in Ottawa, Kingston Regional Hospital Laundry Services in Kingston, Ontario, teaching at the University of Guelph, and 17 years running his own consulting business. Hart returned to the Rideau Regional Centre in 1987 and remained until the last clients were moved out in March of 2009, at which point he retired. Retirement didn’t last long, however, as he was asked to help out when a former prison farm in Kingston, Ontario was putting in a laundry. Hart returned home to the Smiths Falls area in June 2011, just in time for Gallipeau Construction’s offer.

Hart Laundry Service officially opened in September 2011 and entered into the key strategic partnership agreement with Booth Centennial Healthcare Linen Services of Mississauga, Ontario in March of 2012. This agreement allows Hart Laundry to expand its services to area hospitals and medical clinics to include surgical linens for sterile operating room environments. Through Booth Centennial, Hart Laundry can now offer clients a large selection of sterile packs, OR gowns and OR linen.

Larry Hart is delighted to be providing laundry services to KDH under the new full service agreement. He expects his current staff of 18 to grow as more hospitals and medical clinics are added to Hart Laundry’s client list. “I love the business,” Hart says. He is excited about the potential to grow the operation, increase the staff, and support the local economy.

Hart Laundry Service has the capacity to process 5 million pounds of laundry per year. Currently they are at 800,000 pounds. It’s clear Hart will work tirelessly until he reaches capacity. Hart’s pride in the laundry operation and commitment to customer service are evident. He will not let a client down because that client has placed his or her trust in him. “Call if you have a problem,” he tells his clients.