The award is presented annually to a volunteer who has shown outstanding commitment and leadership toward the growth and vitality of the Leeds and Grenville economy. 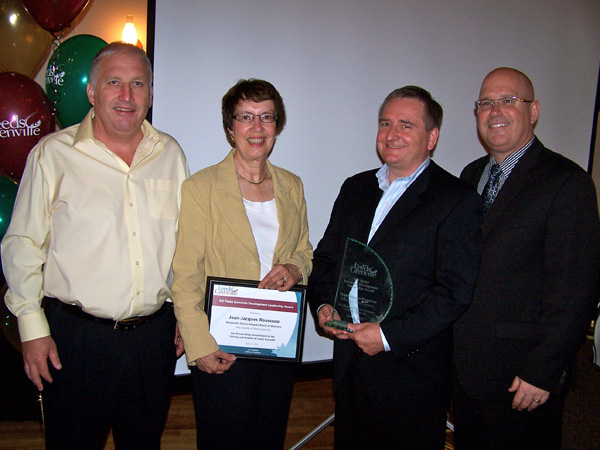 KDH Board of Directors Chair Jean-Jacques Rousseau (second from right) accepts the Bill Thake Economic Development Award on behalf of the Board. Also pictured, Dermid O’Farrell (far left), Chair of the KDH Foundation Board, Lis Angus (second from left), Vice Chair of the KDH Board of Directors, and Steve Clark (far right), Leeds and Grenville MPP.

This year’s award was handed out at a United Counties Leadership Forum held June 14 in Roebuck, Ontario. Rousseau accepted the award on behalf of the entire KDH Board of Directors. The Board was cited for overseeing the multimillion-dollar expansion of the hospital and the launch of the new Total Joint Replacement orthopaedic surgery program. The Board was also recognized for providing leadership during a period when the hospital saw an increase in its operating budget and the hiring of new staff for orthopaedic surgery, leading to a $7.8 million increase in the local payroll. The Board was further commended for playing a role in the hospital’s offer of office space within its campus to its service partner, Beth Donovan Hospice.

Now in his seventh year of volunteer service to the community on the Board, Rousseau has been Chair for one year. He commented that he was pleased to see the hospital being recognized for its leadership at the County level. “Serving on the Board of Directors is so rewarding,” he added, “as we have such an interesting and dedicated group of people on the Board.” He further commented that KDH is “blessed with the leadership of its CEO, Colin Goodfellow, and his committed staff”.

This is the second year for the award, named after Westport, Ontario’s Mayor Bill Thake, who has spent a record-breaking 50 consecutive years in municipal government, including four terms as county Warden.

Leeds and Grenville MPP Steve Clark commented that this year’s nominees came from a variety of backgrounds, but they all shared one thing: they give their time and talent to improving economic activity in Leeds Grenville. The other nominees were Karen Cook (Athens), John Jodoin (Augusta Township), Frank Kinsella (Township of Leeds and the Thousand Islands), and Dana, Mike and John Purcell (Front of Young Township).