Goodfellow is the only Eastern Ontario hospital CEO on both the OHA Board of Directors and its Executive. In recent years the Kemptville Hospital CEO has emerged as a strong champion of and leader in the complex job of revitalizing Ontario’s health system. Selection by his peers for the executive position comes on the heels of a series of successes for Goodfellow and his hospital. 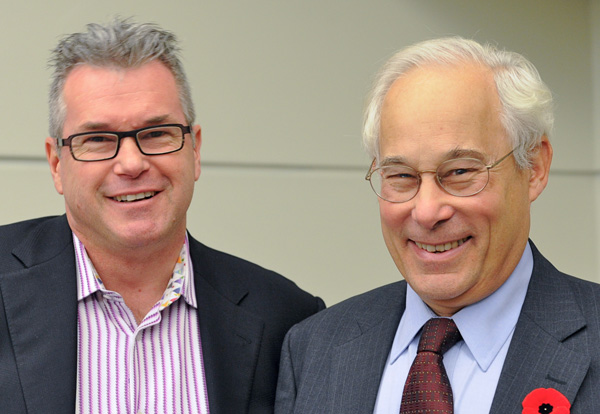 Further, the hospital’s new orthopaedic surgery program was celebrated at the recent OHA convention as an Ontario best practice. It earned this distinction for reducing patient wait times for joint replacements while saving the system money.

The innovative joint replacement program is not the first example of KDH changing the way the health system works: the hospital’s creation of the 30,000 square foot Rideau Valley Health Services in Barrhaven, Ontario is widely seen as a new way to serve fast growing communities without the need for expensive new hospitals.

Goodfellow has also been notable for asserting that in tough economic times our public sector leaders need to take seriously their duty to lead change. The OHA took up the challenge when it advocated that any new money in the health system be given to the community sector and not to hospitals. Goodfellow said at the time, “Special interests have to stop playing defense if we are going to move our health system forward.”

His track record in innovative leadership has earned Goodfellow a role on the OHA strategic planning committee as well as a position on the Provincial Leadership Council of Small, Northern and Rural Hospitals.

Commenting on his success in leading local and provincial system change, Goodfellow offered up this assessment: “Let’s face it, Queen’s Park is surrounded by billion dollar teaching hospitals – getting through that fortress to communicate that, in towns like Kemptville or Brockville, the hospital is a trusted community resource – is tough work. Local hospitals can effectively lead change and do the job our communities need us to do. What is obvious to us in Eastern Ontario often gets lost on the trip to Toronto.”

With recent political talk on all sides saying that the way forward is to build out from hospitals to community health, Goodfellow thinks the hard work has paid off. “It is not enough to point to a desired future,” he said, “You have to start building it to let people see what tomorrow can look like.” A number of places in the province, including Kemptville, have done practical, on the ground innovation. Now, according to health system observers, there is a new consensus emerging around tomorrow’s health service system.

Goodfellow has been involved in Ontario’s hospitals and the healthcare field for over two decades, including as Director of Policy and Government Relations with the Ontario Hospital Association, Vice-President of the Hospital Council of the Greater Toronto Area, Vice-President, Strategic Operations, Toronto East General Hospital, and working with Dr. Henry Friesen to transform the Medical Research Council into the Canadian Institute of Health Research.